I would like to once again thank those who participated in our surveys or met with us and provided frank and helpful input during the past few months. The results show that the Board continues to enjoy a healthy level of trust, in fact higher than in previous surveys. Eighty-four percent of our  survey respondents said there is an equal or greater need for an independent watchdog now compared to when the Board was created.

The Board’s mandate currently extends to other resource sector operations such as oil and gas or hydro power, where they are operating under a Forest Act tenure (e.g., a Licence to Cut), however many activities fall outside our jurisdiction. We are assessing how best to respond to this need, and will be discussing options with the Government.

We heard that there was room to increase our effectiveness and be more efficient in the way we select, gather and report some information. This has led us to look for ways to minimize duplication between our audit program and company specific certification audits; more clearly distinguish between compliance audits and broader special investigations; and commit to publishing a periodic summary of audit observations that can contribute to continuous improvement.

As we look forward, the priorities for the Board are to:

Among the many topics the Board expects to work on in 2011, there are three specific areas where we propose to be proactive:

The Board looks forward to the New Year and wishes all our readers the best in 2011, the United Nations International Year of Forests.

What Do You Think?

One hot topic around the forest practices world is the degree to which we in British Columbia rely on professionals to meet the public interest. Some people report significant benefits to the current approach while others are quite critical. To date the Board has focused more on on-the-ground results than on the decision processes, however it has been suggested that we evaluate professional reliance. I’m interested in what our readers think about this.

Specifically:  If we were to carry out an evaluation of the effectiveness of “professional reliance”, what would you recommend we use as a measure of success?

E-mail your thoughts to the Board Chair at FPBoard@gov.bc.ca.

Board Meeting And Field Tour - Kelowna 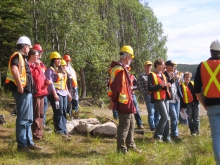 In September, the Board held a strategic planning meeting in Kelowna. For two days, the Board met to discuss its current and future priorities. As part of the meeting, the Board also took the opportunity to tour the Mill Creek Watershed, which provides drinking water to the Kelowna community of Glenmore. Representatives of the various sectors that are active in the watershed joined the Board for informative discussions about how they are managing activities to protect drinking water. Logging, cattle grazing, and recreation activities all occur in the watershed, and all pose a risk to the quality of the water.

Coldstream Ranch showed its approach to managing its cattle; Tolko presented its approach to logging beetle-killed trees; the water purveyor, the Glenmore Ellison Improvement District, discussed water management issues from its perspective; and MTCA and MOE showed some of the actions they are implementing to manage ATV, off-road and mountain biking activities to ensure protection of streams and water quality in the watershed.

Fire Preparedness - What Does It Mean?

This past summer was a very big forest fire season for BC. We were all riveted by the scenes of massive smoke plumes over Binta Lake in the north-central plateau, and people being evacuated from their homes west of Williams Lake. The Forest Service was kept extremely busy for a good part of the summer fighting fires. The Board’s jurisdiction extends to the Wildfire Act and so we are always very interested in this issue.

One of the risks of working in the bush is starting a fire. Being prepared for a fire includes having fire tools, water, hose and pump on site, but also monitoring the weather and shutting down early and having a fire watch when the fire danger is high. The Board is interested in how licensees and contractors are addressing the fire preparedness requirements of the Wildlife Act and carried out the fieldwork for a special investigation this past summer.

Staff interviewed or surveyed over 40 licensees and visited 34 active sites where harvesting, road construction or site preparation was ongoing to view and discuss fire preparedness. The report is currently in preparation and it will be ready for release early in 2011.

It will highlight good fire preparedness practices in the interest of contributing to fire prevention.

In 2007, government began moving towards a virtual integrated resource management agency with the Resource Management Coordination Pilot Project. Initially, that project began with coordinating authorization for access to resources, through FrontCounter BC. It then moved to incorporate compliance and enforcement efforts across resource agencies. Then this fall, government announced the creation of the Natural Resource Operations Ministry, which officially integrates the operational activities of the resource ministries.

For some time now, the Board has been contemplating the implications of integration for BC’s forests. This latest reorganization brings the issue to the forefront, as many of the activities the Board is watchdog over, are now under the control of the new ministry, while the legislation and policy that guide operations remain with the Ministry of Forests, Mines and Lands.

Land Use Planning - The Good News, And The Bad

First, the good news. During a recent audit of forest practices in the Skeena Stikine Forest District, the Board was very pleased to find the licensee was working hard to ensure the objectives set in the Bulkley Land and Resource Management Plan and the Bulkley Valley Sustainable Resource Management Plan were being carried forward into the company’s forest stewardship plan and its site plans. Careful attention was paid to the plans and the consistency with objectives established by government through these plans. The audit found that the licensee was clearly disigning its operations to implement the objectives of the LRMP and SRMP, and was doing so despite the extremely difficult economic situation faced by the industry and the company. The Board attributes this success to the presence of clearly articulated government objectives developed through a public process, combined with the willingness and desire of company personnel to explicitly address the public’s expectations as it conducts its operations. Well done.

And now, for the bad news. In another audit, we looked at the Dawson Creek LRMP to determine its status. In the introduction, the LRMP stated: “The plan will guide land and resource development on Crown land for a period of 10 years.” The plan was approved March 30, 1999 – so it has now officially lapsed – it no longer “guides” anything. The intent, of course, was that it would be fully amended through a process that was supposed to start 8 years after 1999 – that didn’t happen. That led us to check the other land use plans in the province for their current status. Sure enough, 15 of 26 plans have lapsed (no full amendment even though it is promised in every one of the plans). Two more will lapse in March 2011. The result is that only 30 percent of the province is presently covered by a land use plan that provides guidance for on-the-ground operations. No reviews or updates of these old plans are taking place. This raises concerns about how relevant these old plans are, given how much has changed in the province in the last decade, especially in MPB-affected areas.

Certification - Does It Assure Compliance?

During our stakeholder surveys conducted this past summer, we heard a number of concerns about Board audits and potential overlaps with third party certification audits. Some even question the need for Board audits of companies that have achieved certification. This led the Board to do two things. First, we updated a bulletin we had prepared in 2003 that discusses the relationship between Board auditees and third party certification. Second, we reviewed all of the audits undertaken over the past 5 years and analyzed the findings based on the third party certification status of licensees. The results show that by and large, certified companies do perform better in Board audits. It is important to note that most certified companies are larger operations with a long history and extensive experience in forest management. New tenure holders and smaller operators, such as community forests and woodlots, are not usually certified because of the large costs involved. Whether or not this lack of resources of experience is a factor in the results is unknown.

Work is wrapping up on several ongoing audits, complaints and special projects. Expect to see a number of publications come out early in 2011, including the results of the Board’s assessment of the effectiveness of government’s RESULTS (Reporting Silviculture Updates and Land Status Tracking) database, as well as licensee compliance with section 86 of the Forest Planning and Practices Regulation, which requires licensees to submit an annual report to RESULTS. The Board’s thought on cumulative effects assessment, and a case study assessment done in the Kiskatinaw River watershed, will also be published early in the New Year.

Another project that should wrap up in spring 2011 is an analysis of remediation orders to determine their effectiveness. Effectiveness will be gauged by assessing the consistency and fairness of orders. It will also be gauged by the extent to which orders are complied with and whether enforcement action is taken for non-compliance with orders.

Welcoming New And Returning Board Members

In October 2010, three board members had their terms extended for two years – Andrea Lyall, Mike Nash and Dave Patterson. Following the appointment announcement, Andrea Lyall was the subject of a profile in the Vancouver Sun, as BC’s first Aboriginal Woman professional forester.

In November, Bill Dumont was appointed to the Board, filling the vacancy left by Al Gorley when he took over as Chair in May.

That brings the Board back to its full complement of a full-time chair and seven part-time members.