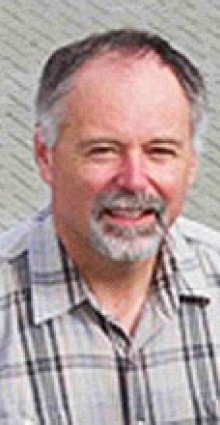 The Board decided in September 2012 that there would be value in summarizing common themes and trends in forest practices, based on our observations of the past few years. This led to a number of bulletins and special reports – some of which are now published and others still in the works. I’ve been very pleased with the response to these reports. They have identified opportunities for improvement and helped focus attention on key issues. We hope that the remaining reports will also be informative and assist with adaptation of forest practices to ever-changing circumstances.

The concept of independent oversight continues to receive strong support.  In addition to broader public opinion, I hear consistently from industry and government officials that the presence of the Board has a positive impact on quality assurance and confidence in forest practices. As other industries make a growing footprint on the landscape, they too would likely benefit from the objectivity and transparency an independent board provides.

Your opinions are always welcome. Please feel free to comment on any of our reports or related issues.

Four Board members’ terms will be expiring at the end of this year, including the Chair. While some Board members may be eligible for reappoint-ment, some will not and so we’re lookIng for expressions of interest from potential candidates. The Board Chair is a full time appointment, and leads the organization, as well as the appointed Board members.

Board members serve part-time and provide strategic advice and direction to the organization. They come from a variety of backgrounds in resource management, but do not represent any particular sector. We strive to achieve a balance of areas of expertise and geographic representation on the Board. The Board meets quarterly face to face and monthly by telephone.

Board Members Heading to Smithers 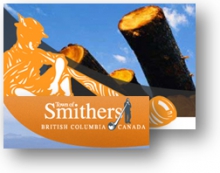 The Board holds at least one meeting each year in a BC forest  community outside the lower mainland. Recent meetings took  place in Prince  George, Whistler and Kelowna. This September the Board will head to Smithers for its next meeting. In addition to our regular Board meeting, we plan to spend one day in the field with local resource practitioners to learn more about local issues in the Northwest.

One of the Board’s current strategic priorities is to compile the results of recent work to pull together reports on trends and issues that can inform and influence the future of forest and range management in BC. This year we have been publishing a series of bulletins to promote discussion of important issues in management of our public forests.

So far we have addressed cumulative effects, professional reliance and public involvement in forest management. We also put out a bulletin on the value of having independent oversight for forest practices. There is one more bulletin to come in the series and it will be out this fall. It will look at the need for a land manager who is accountable for resource management decisions. Response to the bulletins so far has been very positive and we hope they are serving their purpose of getting people thinking and talking about these issues.

In addition to the bulletins, we are currently working on several longer reports. One report addresses the management and enforcement of range planning and practices under the Forest and Range Practices Act (FRPA), based on the many audits and special investigations the Board has conducted over the last decade. This report is due out this fall.

Another special report in preparation will be examining the issue of risk and decision-making under FRPA. This is a frequent issue in complaints that come to the Board from the public, where a forest licensee and other land users (water users, tourism operators, trappers, etc.) are disagreeing over proposed forestry activities, yet it is the forest licence holder who has the authority to assess the risk and decide whether its activities will proceed, even though it is not the party that will bear the consequences that may result. There are issues both with how risk is assessed and the fairness of decision-making.

We will also be summarizing the complaints received by the Board over the years in a special report, and we are working on a report that will provide the Board’s views on how well FRPA is working, nearly 10 years into implementation of the results-based legislation.

During the Board’s June meeting in Victoria, we spent an afternoon looking at community-based activities and education projects to address invasive species. 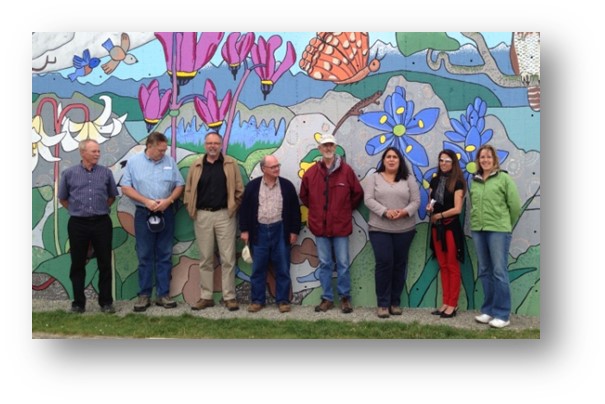 Viewing the Garry Oak ecosystem mural that replaced a wall of invasive English ivy at Rogers Elementary School, next to the Christmas Hill Nature Sanctuary in Victoria. With school staff and District of Saanich staff. 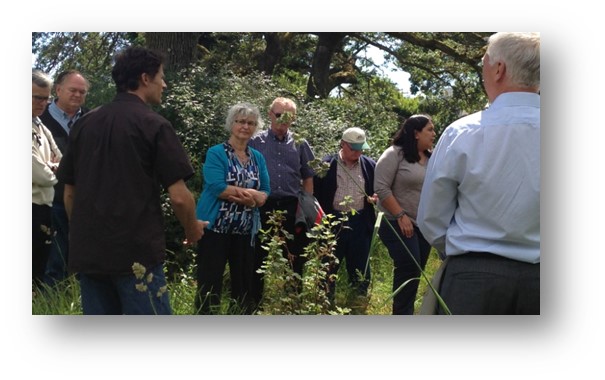 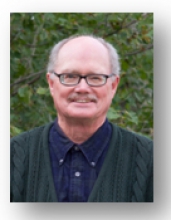 Current Board member Dr. Bill McGill was elected to the rank of AAAS Fellow in the “Agriculture, Food and Renewable Resources” section of the American Association for the Advancement of Science (AAAS). Each year the AAAS Council elects members whose “efforts on behalf of the advancement of science or its applications are scientifically or socially distinguished.”

Bill was inducted on February 16, 2013 in Boston, MA. The American Association for the Advancement of Science (AAAS) is an international non-profit organization dedicated to advancing science around the world by serving as an educator, leader, spokesperson and professional organization. In addition to numerous other activities, the AAAS publishes the journal Science.

This past winter, we lost an icon in Canadian forestry and one of the founding members of the Forest Practices Board, Dr. Gordon Baskerville. Dr. Baskerville served on the very first Forest Practices Board and was instrumental in setting up the values and guiding principles and the policies and procedures that still guide our work today, nearly 20 years later. He has left a legacy for forest management in BC and his guidance and insight will be sorely missed.

The appeal by Babine Forest Products to the Forest Appeals Commission of a district manager’s decision to refuse to approve an amendment to Babine’s forest stewardship plan has concluded. The amendment proposed a result or strategy for the government’s visual quality objective for a scenic area visible from Babine Lake. The district manager decided that the result or strategy was not consistent with the objective and did not meet the test for approval.

The Board joined the appeal, arguing that the district manager was correct in refusing to approve the amendment because Babine did not propose a result or strategy that conformed to the legal definitions, which say it must be measurable or verifiable. The Board wanted to focus attention on the importance of results and strategies and the approval test under FRPA.

However, before the hearing took place, Babine and the government settled the appeal based on revisions to the proposed result or strategy that, in their view, met the approval test. Although disappointed that the Commission would not be making a ruling on whether the proposed result or strategy met the approval test, the Board made its views known to the parties and they were able to take that into consideration in revising the forest stewardship plan.

The 2013/14 audit season is in full swing. So far auditors have been to Southern Vancouver Island, the Sunshine Coast, the North Coast and Nass Valley, the Columbia Valley from Invermere to Golden and the Prince George area, including the Robson Valley. They have looked at woodlots, major licensees, BC Timber Sales and a BC Hydro transmission line for compliance with FRPA and the Wildfire Act. Several more audits will be carried out before the snow flies in October.

The Board recently published an audit of a transmission line project in a fairly remote corner of northwestern BC.

This audit was a perfect illustration of the benefits the Board could provide to government and the public by commenting on activities of non-forestry licensees that impact public forest land. Because our mandate is limited to licences issued under the Forest Act, we could only audit the clearing of the transmission line right-of-way for this independent power project. We were not able to comment on the clearing, construction or maintenance of the access roads that form a major part of the project because the authority for the roads was issued under the Land Act. The project proponent also has an approval certificate under the Environmental Assessment Act that sets conditions for construction of these roads, to ensure environmental protection is achieved. While it may be the responsibility of other government agencies’ inspectors to check on compliance, this is a remote area and our auditors were flying over the roads while they were looking at the transmission line corridor. Wouldn’t it make sense for them to examine and report to the public on how well the proponent is meeting its obligations under other environmental legislation, at the same time? We certainly think so. It would provide assurance and oversight for minimal additional cost. The Board is continuing to discuss its mandate with government and we urge you to weigh in with your thoughts.

Recent audits have identified a fair number of concerns with bridge construction and maintenance on forest roads. As a result of concerns that this might indicate a trend, the Board is carrying out a new investigation of bridge practices, looking at all government and industry bridges constructed since January 1, 2010, in five districts around the province – Vanderhoof, Williams Lake, Cariboo-Chilcotin, Rocky Mountain and Chilliwack. The Board is cooperating with the Association of Professional Engineers and Geoscientists of BC (APEGBC) and the Association of BC Forest Professionals (ABCFP) on this work. A report on the results will be published in early 2014.

The mountain pine beetle epidemic in BC has profound implications for the future of forest communities in the mid-term (starting in approximately 10 years and extending into the future 30 to 50 years, depending on the place).

Government has put a great deal of effort into estimating what the timber supply will be over that period, before young trees grow back to replace the ones killed by the beetle. There are numerous assumptions that go into the projections; one of the most important being that the forest industry will avoid harvesting live (or green) trees as much as possible in the short term to save those trees for the mid-term. However, the Board has heard concerns that the harvest in some areas is already switching from dead pine to other trees (live pine and other species) that could contribute to the mid-term supply. This investigation will look at whether current harvesting is meeting government’s expectations with respect to the salvaging of dead trees. A report is anticipated for release by the end of this year.

Of all the reports released in the last six months, the most media interest has been in the February 2013 Roads and Bridges Special Report—which describes the significant increase in non-compliance that our audits have found for these two types of activities in the past few years—and the June 2013 Compliance Monitoring and Inspections Special Report—which describes the significant decrease in government’s inspections of forest harvesting and roads activities in the past few years. In terms of overall interest, the most website visits have been to the roads and bridges report, our bulletin on cumulative effects  and our audit of Interfor’s operations in the Great Bear Rainforest.

The Board has been invited to present the results of the Roads and Bridges Special Report in a number of venues across the province. Before the report was published, Board staff gave a photo-based PowerPoint presentation of this work in Cranbrook at the Resource Roads in BC conference last November. They were then invited to present the results to a number of staff at the Ministry of Forests, Lands and Natural Resource Operations and also to the Joint Practices Board of ABCFP and APEGBC. The Board has been invited to present it to the Road Health Coalition, “Road Safety in the Boom Times,” taking place in Prince George October 7 & 8 and at the APEGBC annual conference in Whistler, October 23 & 24.